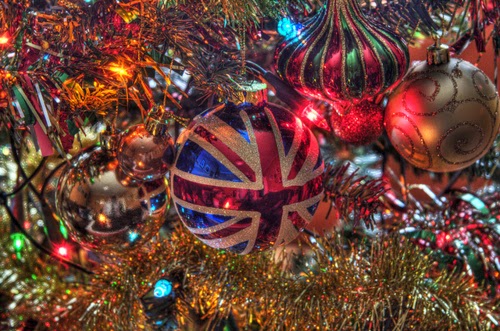 Having helped set up the Public Records Office (now the Post Office), Sir Henry Cole and artist John Horsley created the first Christmas card in 1843 as a way of encouraging people to use its services.

While Christmas trees have been around for a millennium in northern Europe, the first one did not appear in the UK until the 1830s. When Prince Albert put up a Christmas tree at Windsor Castle in 1841, he started what became an evergreen trend.

Early mince pies were made of meat, fruit and spice and inspired by Middle Eastern cuisine brought back by the Crusaders.

They commonly had 13 ingredients representing Christ and the Apostles, and were formed in a large oval shape to represent the manger. Meat had disappeared from the recipe by Victorian times, although beef suet is often still included.

Leaving stockings out at Christmas goes back to the legend of St Nicholas. Known as the gift giver, on one occasion he sent bags of gold down a chimney at the home of a poor man who had no dowry for his unmarried daughters. The gold fell into stockings left hanging to dry. St Nicholas was later referred to by the Dutch as Sinterklaas and eventually, by English-speakers, as Santa Claus.

Synonymous with Christmas and the subject of a traditional British folk carol, both holly and ivy were originally used in pre-Christian times to celebrate the winter solstice. As they provide a rare splash of colour in the darkest month of the year, their popularity has endured.

London sweet-maker Tom Smith invented Christmas crackers in the late 1840s, inspired by traditional, paper-wrapped French bonbons. Even though he included mottos or riddles inside each, it was not until he found a way to make them “crack” when pulled apart that sales took off. His sons Tom, Walter and Henry later added hats and novelty gifts.

Turkeys originated in Mexico and were first brought to Britain in 1526 by William Strickland. Henry VIII enjoyed turkey and although the bird became fashionable in high society in the late 19th century it was Edward VII who made it de rigueur at Christmas for the middle classes.

This Christmas staple possibly has its roots as far back as the Middle Ages in a wheat-based pottage known as frumenty. By the mid 17th century, it was thicker and had developed into a dessert with the addition of eggs, dried fruit and alcohol. In Victorian times it was a Christmas favourite. It is traditionally made a week before Advent on what is known as “stir-up Sunday”.

Hanging mistletoe in the home is an ancient pagan practice adopted by early Christians. The word itself is Anglo-Saxon and the tradition of kissing under the mistletoe originated in England. Each kiss required a berry to be plucked until none remained.

Carols were songs and dances of praise and joy in pagan times and the practice of carol singing carried over into the Christian era. Carols have been written through the centuries but the most familiar date from Victorian times. Today, popular songs such as Bing Crosby’s White Christmas and Slade’s Merry Xmas Everybody are just as much a part of Christmas as carols.